Powering up the powerhouse

Maps are good things. Great things, on occasion. They can be wonderfully useful for orientation –and I don’t mean just in the sense of getting from A to B, but also in helping to make sense of the world around us.

An example? Take a look below. This map shows a different way of visualising population density, showing how many people there live within a 100km radius rather than how many people live in each square kilometre. 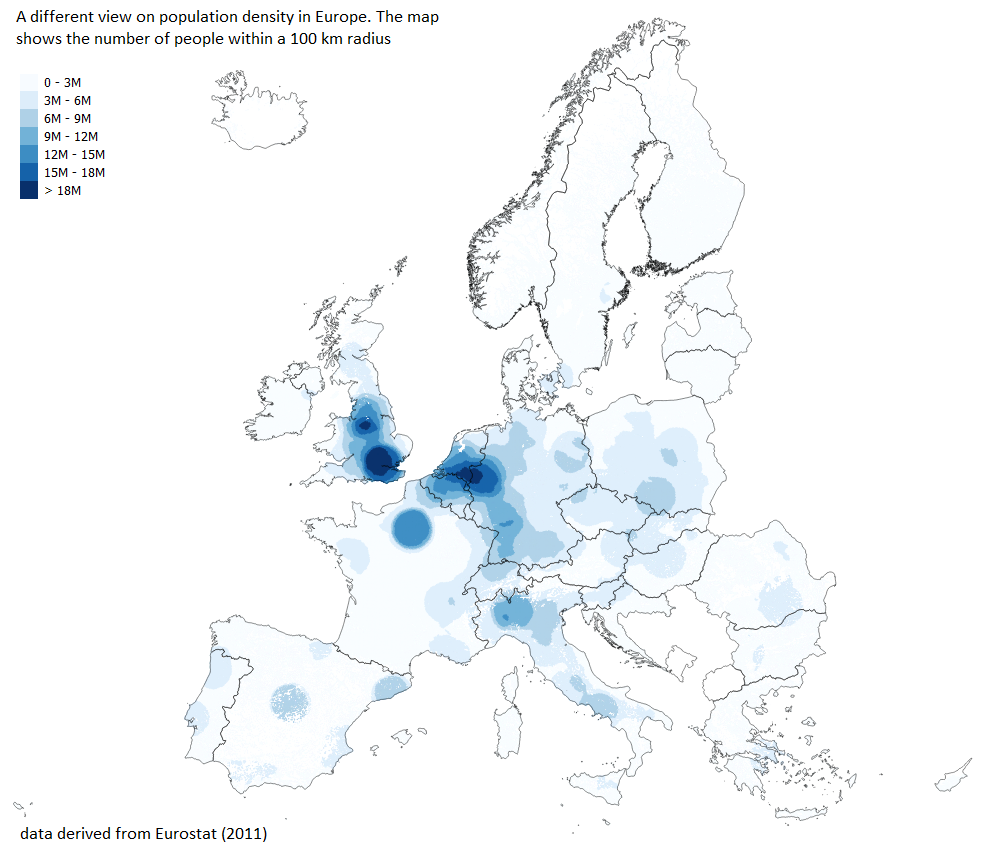 Note that it’s showing population proximity rather than population density, which would be this map.

Germany is Europe’s powerhouse, and we can see here just how large the cluster of people in the Rhine and Rhur area is.

France is incredibly unipolar – there is Paris and then there is basically nothing (which, incidentally, seems to be the attitude of most Parisians I’ve met).

Meanwhile in Spain, Madrid and Barcelona look separate – and of course there is growing momentum to make them more separate still.

Maybe I’m a little biased, but Britain seems to be the most interesting when viewed in this European context.

A lot of ink has been spilled describing the dominance of London. Research published by think tank IPPR North found that almost half of all jobs created in the last decade were in London and the south east.

But wait! There’s something else on the map. A big blob of millions of people up there in the North, centred on Manchester. Greater Manchester – the devolved city region – is about 80% the size of Greater London though it has only one third the people. Not too far away are some of the country’s other great cities, which together form a unique cluster, potentially a British Randsdat or even Keihanshin.

The map below shows just how good the case for such a powerhouse is and how powerful such a powerhouse could become. The Greater Manchester region has one of the largest concentrations of people of any metropolitan region in Europe.

But there’s something holding the region back. Something which can be easily fixed (though it’ll take a while). That something is infrastructure.

In London you can whizz around happily on the tube, and it’s only a few more years until Crossrail opens. £15 billion £18.25billion well spent! For the most part, Londoners are extremely well connected with each other thanks to a reliable, extensive transportation system. This is what makes modern London possible. Up North it’s a bit grimmer.

Leeds and Manchester are only 40 miles apart. Yet the fastest train between the two cities is an hour (although recent experience with Transpennine “Express” would say otherwise). Reading is 34 miles from London Paddington and you can travel between these two stations in just 24 minutes if you catch a shiny new IET train.

Meanwhile commuters up north are still having to cross their fingers their train isn’t a 1980s bus on rails (h/t Alex Sobel MP’s #PacerWatch campaign).

A Pacer train spotted in Leeds on 23 February 2020, still causing misery for northerners.

Chris Grayling’s refusal to approve the construction of an additional two platforms at Manchester Piccadilly way back in 2014 now means passengers are facing the very real possibility of service cuts as the Castlefield Corridor, a one mile section of track between Piccadilly and Deansgate, can no longer cope with the volume of trains being squeezed through each hour.

The resulting delays (and cancellations) are so severe that workers have had to drive into Manchester city centre instead. Others have changed jobs to avoid the city altogether. No wonder then that the Northern Powerhouse Independent Economic Review (NIER) has said that poor transport connectivity, reliability, quality and inadequate capacity are all acting as a constraint on productivity and economic growth in the north of England.

With the government’s newfound interest in the north (after winning several seats there in the last general election), and HS2 now looking like it might actually happen, will we see the government finally take the north seriously and invest in its infrastructure?

The government is making all the right noises, but whether rhetoric turns into reality remains to be seen.